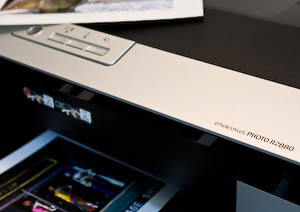 Epson’s Stylus Photo R2880, an $800 large-format (13″) printer, enters a vastly different printer market than that of its predecessor, the Stylus Photo R2400. When the R2400 debuted in 2005, Epson owned all aspects of the archival photo printer market, and the R2400’s only real competition was the model it replaced, the Stylus Photo 2200. The R2880, however, joins a market crowded by competitors from HP and Canon, as well as Epson itself: there are now five large-format, pigment-based photo printers priced between $500 and $1,000, and Epson’s competitors have done a superb job of catching up to their longtime rival’s print quality. There are many observers who believe that Epson still has the edge in quality, but there’s no disputing that HP and Canon have put themselves into the game, HP with the Photosmart Pro B8850 (and its older sibling, the B9180) and Canon with the Pixma Pro9500. How does the R2880 match up? Read on.

We’re continuing to work on our full review of Epson’s new Stylus Photo R2880, which we hope to have online in the next week or so. In the interim, we have been able to finish our benchmarking of the new inkjet, comparing it with its predecessor, the Stylus Photo R2400, and the two semi-pro printers closest to the R2880 in fighting weight: HP’s Photosmart Pro B9180 and Canon’s Pixma Pro9500.

We know that speed is usually a secondary or even a tertiary consideration when looking at photo printers, but, with today’s increased competition, it can be a factor for some people when they’re choosing an inkjet. Below are two charts, noting the print speeds for six different print sizes, ranging from 4" by 6" to 12" by 18" on the R2880 and the other three printers.