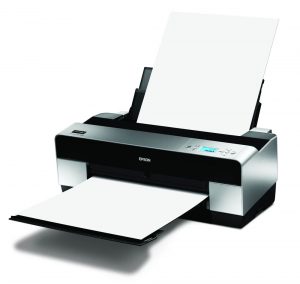 On the surface, the 3880 offers a few incremental improvements over the Stylus Pro 3800, adding the Vivid Magenta inks, an improved printhead, and new screening algorithms. The case design, print engine, and ink system (with its spacious 80ml cartridges and 8-channel head that requires switching of matte and photo black inks) are identical to the 3800, which is testament to that printer’s design and its success in the market, as well as the relative maturity of the photo printer industry.

Here’s a rundown of the new features in the Stylus Pro 3880:

For those new to this sector of the market, it’s worth listing the other notable characteristics of the 3880:

There is bound to be some disappointment with this announcement, especially from photographers looking to the 10-ink UltraChrome HDR inks in the Stylus Pro 7900/9900 wide-format printers, or the 12 inks in HP’s Designjet Z3200. But, while you might get a slightly larger gamut with more inks, it’s highly unlikely that it would be worth the extra mass and expense for a desktop printer that already has sterling print quality.

The real issue that will come up is the ink waste when swapping inks, but in the two-and-a-half years that I’ve used my 3800—and spoken with many, many 3800 users—it really has been a minor issue. Yes, in an ideal world, we would all want a 9-channel printhead with no ink waste whatsoever, but the reality is that, on the 3800, this is a problem that rarely gets in the way, thanks to the 80ml cartridge capacity, which makes it much more economical to print. (And don’t think that there isn’t ink waste in all inkjet printers; there is.)

Does it change the market?

Over the past 18 months, there has been a pretty steady drumbeat of anticipation for an update to the Stylus Pro 3800. Not a week goes by where I don’t get at least two or three emails from readers looking to buy a 3800 and worrying that they’ll get caught off guard with an announcement from Epson. My response is always the same: “It’s a great printer, and if you need it now, buy it now,” and I can’t see any reason that will change with the 3880 release.

The Stylus Pro 3880 is definitely an incremental update to the Stylus Pro 3800, but it shouldn’t be dismissed as a placeholder upgrade. The new inks, when combined with the AccuPhoto HD2 screening, should represent a slight, but noticeable improvement in print quality for discerning artists and photographers, especially with tricky images, black-and-white prints, and anything being offered for sale. And the 3800’s basic design has been proven again and again as the go-to desktop printer for the professional photographer.

Part of this is a tacit acknowledgement that we’re running out of room when it comes to big enhancements in photo quality; the bar has been set pretty high by Epson, and we just aren’t going to see the type of generational print quality changes that we saw in the early parts of this decade. (It’s worth noting that both HP and Canon have raised the output quality level of their professional printers as well.)

As much as we all might want some magical desktop photo printer that costs next to nothing and produces prints for even less, the fact remains that the Stylus Pro 3800 was a great product that sat uniquely in the market, with no real competition. The Stylus Pro 3880 should slip effortlessly into its place.

The big question is whether HP or Canon decide that the 17-inch desktop market is now worth playing in: both companies have been extremely silent while Epson has maintained a sizable lead in the market. Epson has proven that there is a middle ground for the professional photographer who prefers a more compact unit with economical printing over wide-format, roll-fed photo printers.

The Stylus Pro 3880 will be priced at $1,295; a Graphic Arts Edition, which comes with a ColorBurst RIP for proofing and design applications, will be available for $1,495. Epson expects both models to ship in October; if Epson’s past history is any indicator, we would expect a few early units to get snapped up quickly, with wide availability by the end of this year.